Zach Ursus Ae-Jarino is a playable character in the MARDEK series. He seems to have a scarred and troubled past. 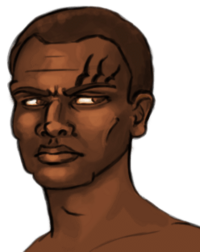 A battle-hardened Mercenary from lands afar. He doesn't speak much at all, so his past is a complete mystery, though it seems as if he's been scarred deeply or he's learned to suppress his emotions... He kills for money and will slaughter whoever his employer wishes to without remorse. He wields an exotic double-bladed sword in combat with deadly skill.

He was a young member of the Bear Tribe, a powerful group of people who lived in near isolation. The mark above Zach's left eye symbolises that he is a member of the tribe. He rarely saw foreigners come in and out of his village, excluding traders, until one day when a Northerner came and asked for assistance. Zach claims that due to the pride and code of honour of the Bear Tribe, the tribe leaders declined the Northerner's request, but Zach did not, apparently. Later, he claims he was like other young people back then; he believed he knew better than his superiors and elders. He secretly accepted the Northerner's request. They went off to a cave to find a treasure. When encountered by many monsters, Zach fought with all his might, and was exhausted at victory. It turned out that the Northerner did not fight, and made off with all the treasure. Zach could not return to the Bear Tribe without being executed for disobeying the code of honour. He then became a mercenary, and did not care who his master was, and his masters (until Mardek, if you keep talking to him as he levels up) did not care about him either.

Zach is first met in the Canonia pub and can be recruited with 1000 gold coins. He must be recruited before defeating Moric in the Goznor Catacombs since after that, Moric's zombies attack Canonia and the pub is locked tight, though he was also gone by that point. If you recruit him, then after defeating Moric on his battleship and escaping it, Zach walks away.

He reappears in MARDEK Chapter 3: Keystones in the Aeropolis pub and can be recruited with 10,000 coins. If you keep talking to him after he reaches certain levels when he levels up, he tells Mardek his story and why he keeps talking to him. When Clavis/Qualna teleports to the Astral Tunnel, Zach walks away, a way of saying his contract with Mardek has expired.

Zach's skillset is Techniques in Chapter 2 & 3. Information on Zach's skills in battle can be found here.

One of many strong physical attackers, Zach's skills provide many uses in multiple combat situations and making him more versatile than most warriors. He also has the highest agility of all physical dominant attackers.

Zach is a good choice for those who want a tactical and passive approach against enemies of multiple kinds.

Retrieved from "https://figverse.fandom.com/wiki/Zach_Ursus_Ae-Jarino?oldid=88099"
Community content is available under CC-BY-SA unless otherwise noted.