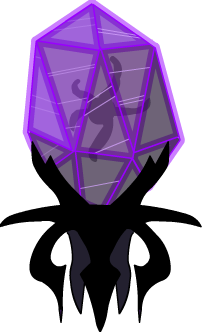 The Violet Crystal is a small meteorite which crashed on Anshar several years prior to the events of the MARDEK series. It was brought to the Governance de Magi to decide what to do with it and, according to Rohoph, all Governors became enraptured by it. They changed their views, their policies, and became more brutal, more merciless. Rohoph tried to destroy the Violet Crystal, but was sentenced to death and had to escape Anshar.

The Violet Crystal seems to mainly amplify extreme emotions in a person such as Moric's sadism, Gaspar's short temper, Melchior's short attention span, Balthazar's critical nature, Anu's superiority complex and Rohoph's self-righteousness and stubbornness. In Dreamstone #17, Qualna notes that each member notices the changes in others but are blind to their own. He also explains that there seems to be an active mind in the Crystal using the Governors for its own ends, a claim supported by the fact that there appears to be some kind of being or artifact encased in the Crystal.

Some fans speculate that the Violet Crystal is, in fact, the Fig Crystal, due to its mind-altering effects and colour.

It is possible that the Violet Crystal is not the only one of its kind. The stone that drove the Yalortians of the Lost Monastery to insanity may have been made of the same material.

Retrieved from "https://figverse.fandom.com/wiki/Violet_Crystal?oldid=84370"
Community content is available under CC-BY-SA unless otherwise noted.