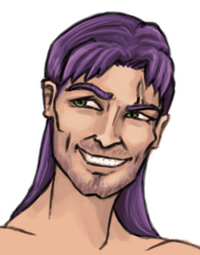 A devoted Yalortian Paladin from the southern lands. He was sent on a mission to explore the mysterious outbreak of monsters in Canonia, and the missing Shaman, as the Priests that he serves sensed that Evil was afoot...

The stereotypical Paladin, Vehrn is self-righteous, arrogant, blindly religious and devoted to his cause. He means well and lives to help others, but he lives to serve and merely obeys his orders rather than thinking for himself, calling those who oppose his masters 'heathens' and suchlike.

Vehrn was orphaned shortly after his birth, and was taken by the Aeropolis Yalortian Monastery. There was apparently some rival of sorts whom Vehrn despised, whose name was Sindoor. Not much else is known about him, however.

Mardek's party first runs into Vehrn at the entrance to Canonia. He then reappears in the Tainted Grotto, wounded and will join the party when he's talked to.

He reappears in the Aeropolis Temple of YALORT in MARDEK Chapter 3: Keystones, having been given a quest by High Priest Vudu to find the ★ Monastery Stone in a lost monastery in Lifewood which has driven the Yalortians there mad. After the coronation of Donovan, he stays in Castle Goznor to help him.

He is a typical religious fanatic, who has strongly pronounced 'holier-than-thou' attitude, but actually is not as strong as he believes himself to be.

In chapter 2, as a paladin, Vehrn's skills are most effective against undead and Dark-elemental foes.

In chapter 3, he can be considered to be the strongest light-elemental user and physical attacker. Once he gains the Smite X reaction, his attacks become multiplied by a factor of his SPR.

Like most Paladins, Vehrn has access to healing and support spells that can be very useful in tight situations. He also has the highest SPR of all physical attackers making his spells and attacks very powerful. Fighting against undead and Dark-elemental foes becomes very easy as long as you have him in your party.

Another advantage to Vehrn is that his equipment provides high vitality and HP boosts as well as higher magic resistance than most physical attackers.

However, it is not recommended to have him in your party for too long, as he only has skills of two elements (Earth and Light), and most enemies in chapter 3 have a much larger variety of elemental resistances/weaknesses than in the previous chapter.

That being said he does have the strongest attacks for those elements. Smite Evil (Light) and Emerald Shock (Earth) are devastating when used on enemies.

Sprite
Add a photo to this gallery
Retrieved from "https://figverse.fandom.com/wiki/Vehrn_Juonour_El-Ganobyi?oldid=88098"
Community content is available under CC-BY-SA unless otherwise noted.