A former Martial Arts Grand Master, too full of honed power to spend his days rotting in a grave. His skull has been ceremoniously trepanned, so as to allow his third eye more insight.

The Risen Master is the Stage 4 power form of the Antipode group.

This section is too short.
You can help by expanding it.

Risen Masters were removed from the game before it was released, so although their data still exists, they do not appear anywhere.

This section is too short.
You can help by expanding it.

Risen Masters learn Chi Ball, a Martial-type technique. They can also use any Martial, Undead, or Lumi techniques that their ancestors learned.

It is unknown what Risen Master is an evolution of. It does not evolve again. 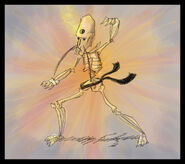 A Rise Master drawed by Pseudolonewolf
Add a photo to this gallery
Retrieved from "https://figverse.fandom.com/wiki/Risen_Master?oldid=85228"
Community content is available under CC-BY-SA unless otherwise noted.