An Annunaki battleship, customised to Moric's liking. It's powered by magical crystals and thaumaturgy. It has enough firepower to decimate Belfan, but Moric prefers to cast spells to raise undead servants to do his bidding instead of just using big guns. He finds that more exciting.

Moric's Battleship is an Annunaki battleship which is owned by Moric and the final dungeon of Mardek Chapter 2: A New Hero.

After Canonia is invaded by Moric following his first defeat by Mardek and his companions, the Goznor Shaman teleports Mardek, Deugan, Emela, Vehrn and Zach to Moric's battleship to stop him. They enter the ship and manage to defeat Moric who has possessed Social Fox's body. Rohoph them casts a spell to prevent him from Soul Transferring again; however, the ship shuts itself down, and Mardek's group only have little time to escape. They enter the Escape Pod room when they encounter Moric's pet Dracelon for the second time. Rohoph tells Mardek that if all of them escape, the Dracelon will surely pursue and kill them, and if they try to fight it, the ship will crash with them still inside, so Deugan insists on staying so that everyone could escape. After Mardek's efforts to convince Deugan prove futile, he, along with Emela, Vehrn and Zach escape.

The ship shuts itself down moments later and crashes into Lake Qur, with Deugan withstanding numerous injuries but narrowly surviving with help from Emela (though Mardek and the rest assume he is killed). The Dracelon is not so fortunate, and is wounded critically and dies shortly after managing to crawl off Lake Qur; however, a necromancer called Saul finds it and RE-reanimates it again as a skeleton. The surviving Droma swim off the ship though the fish quickly devoured them all due to their small size and fragile flesh. The ship dissolved when it self-destructed, but as it fell into the lake, many of its solid components remain largely intact. 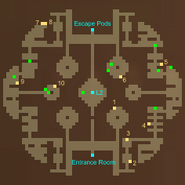 L2
Add a photo to this gallery
Retrieved from "https://figverse.fandom.com/wiki/Moric%27s_Battleship?oldid=82617"
Community content is available under CC-BY-SA unless otherwise noted.