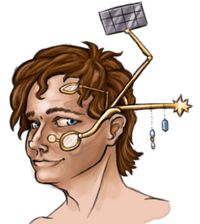 Goznor's resident eccentric Inventor. He s-s-speaks with a s-s-s-stutter. He's a skilled machinist, and spends most of his time constructing odd clockwork mechanical creatures. He claims that one day they'll be used in homes and on battlefields all over Belfan, though he despises the latter part if it's true. He's a pacifist, y'see.

Though most of the inhabitants of Goznor shun him due to their fear of the unknown and the unnatural, Mardek and Deugan have taken an interest in his work, for which he is glad.

Meraeador was born in Goznor, and spent most of his childhood inventing and tinkering with machinery, encouraged by his parents and other villagers. One day, however, one of his inventions backfired and ended up killing his parents, after that he was shunned and isolated by others. Because of that, Meraeador considered committing suicide, but ultimately decided against it due to Mardek and Deugan, the only people in Goznor who continued to be interested in his works.

In MARDEK Chapter 1: A Fallen Star, he gives Mardek and Deugan a sidequest to find 5 LeadPipes in the sewer for a mechanical man he is creating. Upon completing it, he rewards the boys with a Cog Necklace.

In MARDEK Chapter 3: Keystones, he is looking for a book that contains a spell which will allow him to give life to his metal man. In addition, he also tells Mardek that he needs a powerful mage to actually cast the spell. Gloria is able to do this, and though she initially questions the ethics of trapping a soul, she agrees to cast the spell out of interest for what life is like in the Soulplane. Meraeador then joins the party to search for the tome.

In the Aeropolis Library, he asks the Librarian for the book, who replies that the book was taken awhile back by a man named Saul, who since has not returned it. After Mardek's party manages to obtain the book, they head back to Meraeador's lab in Goznor. Gloria tells the party that they need some rare ingredients to cast the spell. After obtaining them, Gloria tells Meraeador that he must be the one who casts the spell in order to become the master of the bound soul. She writes down a translation of the runes in the book for Meraeador to recite, while she manipulates the energy needed for the spell. However, on the final word, Meraeador stutters on the first letter, causing 4 souls to be summoned into the metal man instead of 1. Gloria then names the metal man "Legion" after a demon in the Bible.

He seems to have developed a romantic attraction for Gloria despite their large difference in age, as evidenced by his Party Dialogue. After Donovan's coronation as the new King of Goznor, Meraeador and Gloria are seen embracing each other.

A full list of Meraeador's skills in battle can be found here.

Meraeador is 'special' by the fact that he can't equip weapons and such cannot attack - he instead uses inventions made in his workbench in battle. Each invention teaches a single skill that cannot be mastered - he needs to equip the invention to use the skill. Up to two inventions can be equipped at at time - one in the weapon slot and another in the offhand slot. He can also repair Legion, restoring it from KO, almost completely restoring its HP, and increasing its STR, VIT, SPR and AGL by 1 each for the rest of the battle. Repair can also be done several times a battle and can be used to increase Legion's already impressive capabilities. If you are going to use Meraedor, it is best to use him with Legion.

Retrieved from "https://figverse.fandom.com/wiki/Meraeador_Dunsin_Fa-Doch?oldid=84659"
Community content is available under CC-BY-SA unless otherwise noted.