The Generic Gold Piece, commonly abbreviated as Gold, is a kind of currency used widely across Belfan. It is frequently dropped by monsters, even though they are only miasmal apparitions.

In the MARDEK series, all enemies drop Gold once they are defeated. The amount of gold dropped is proportional to the level squared, and is calculated by the formula: 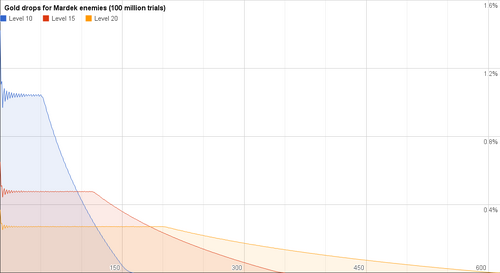 Three enemies in the game drop additional gold alongside their random drop, these are:

Regal Crowns teach the skill Double Gold, which increases the amount of Gold enemies drop according to the formula $ \mathit{gold} = \mathit{base} \times (1 + \mathit{users}) $, where:

Legion can learn the Money Attack! skill, which deals 1 damage for every 500 gold that you have.

Retrieved from "https://figverse.fandom.com/wiki/Gold_(MARDEK)?oldid=85039"
Community content is available under CC-BY-SA unless otherwise noted.