Gloria Eh-Korey is a playable character in MARDEK. She is Elwyen's best friend and also has a brother whom she doesn't like, Steele. 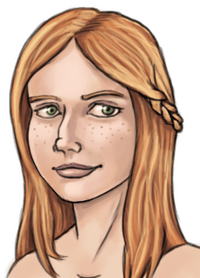 She was always teased by him, and considered him a negative role-model; she specifically made sure that she had none of the negative traits that he so obviously possessed.

Gloria has always felt that she was 'at one with Nature', and used to visit the Canonia Shaman regularly...

The position of Shaman must pass on to another person whenever a Shaman dies, and this other is chosen by the planet. Gloria was selected to take over from the old Canonia Shaman, and now spends her time in the Shaman's Cave, solving minor village disputes, brewing potions, and et cetera.

But she decided to join Mardek after thinking Canonia is always peaceful and never in danger.

In Chapter 2, she can be talked to in her home. That's when she is introduced as Elwyen's friend, whose parents took in the orphaned girl. Additionally, if the player decides not to talk to the injured Vehrn, she is presumably the one who alternatively saved him during the Missing Shaman quest in the Tainted Grotto. In this scenario, it would lead Vehrn to remember receiving help from "some orange-haired girl" later at the beginning of The Lost Monastery quest.

In Chapter 3, she has become the new Shaman of Canonia following the old Canonia Shaman's zombification and defeat by Mardek and his companions. She joins Mardek in his quest to find the Elemental Crystals of Belfan after Steele steals the Dark Crystal from the Dark Temple. She is required to be in the party to learn more from any of the other shamans in Belfan. She is also needed for revealing the location of Aeropolis. She is also required to recruit Meraeador so that he can complete his metal man. During the course of their travels, Mardek and his party come across the materials needed to complete the metal man, and, with the help of Gloria, Meraeador finished his metal man.

A full list of Gloria's skills in battle can be found here.

Being able to control and nullify all natural elements as well as access to healing, curative and support spells makes Gloria one of the most powerful spellcasters in Mardek's Party. Nature's Favour, a passive skill unique to Gloria, also allows her to be resistant to some status effects.

Her equipment has the advantage of resisting and empowering elements. She also has fairly high vitality (and HP) despite being a mage-type character.

Being a powerful spellcaster means that Gloria will be very reliant on magic; her variety of spells also take quite some time to learn, and she does not have as much MP as Sharla, Donovan and Elwyen.

Retrieved from "https://figverse.fandom.com/wiki/Gloria_Eh-Korey?oldid=83548"
Community content is available under CC-BY-SA unless otherwise noted.