Emela Andra Wu-Jardu is a young female human hailing from the kingdom of Goznor and a playable character in the MARDEK series.

Little is known about Emela's background, as she does not talk much about it. She claims to be from Canonia, but seems not to, as when Deugan asks if maybe they should see her house or meet her friends on arrival to Canonia, she immediately says strange excuses ("Oh, I'm sure my house has been blown down or something by now", "Oh, they probably don't remember me anymore") and tries to change the subject. She is the spell caster of the group, using wands to attack opponents. 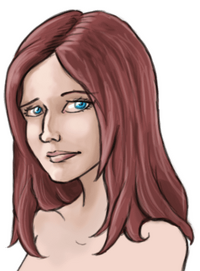 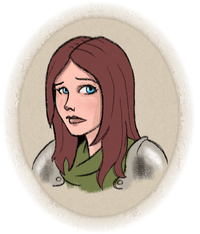 An attractive young girl who claims she comes from Canonia. She joined the Guard at the same time as Mardek and Deugan, and the two young men have had their eyes on her since. She possesses the power to wield elemental magics.
Her eyes are a brilliant, mesmerising shade of blue, and they almost appear to glow...
Though she says she grew up in Canonia, Emela doesn't speak of her past or her childhood there. Suspicious?

Though Emela's early life is not revealed much in direct involvement, by watching the Dreamstones the player can get a decent idea of who she is. Emela was born to the former Guardians of the Water Temple in Lake Qur, where she lived her early life in solitude. Upon turning 17, Emela enrolled in the Royal Guard of Goznor alongside Steele, Donovan, Sharla, Mardek, and Deugan in order to grow stronger when she would one day be the Water Guardian. All the male guards-in-training developed crushes on her except Donovan, Emela didn't favour any of them, most noticeably Steele, whose attitude she despised.

Upon the first true test of the Guards, Emela is paired off with Steele, albeit unwillingly, and takes the left path throught the mines. She later joins up with Mardek and Deugan and together they defeat Muriance, leader of the bandits. But when Steele attempts to kill Muriance, Emela strikes him with a lightning bolt, trying to stop him, she seemingly 'kills' him. With a heavy heart, Emela returns with the other guards, who have agreed to keep Steele's 'death' a secret.

Later, Emela is paired up with Mardek and Deugan to investigate strange goings-on in Canonia. They travel across the continent, stopping to aid a young girl named Elwyen, before discovering that the Canonia Shaman had fallen under a dark influence and are forced to destroy her. Emela, Deugan and Mardek return to Goznor only to discover that the town is under attack by the evil Necromancer, Moric. They travel into the catacombs and kill Moric, and return to Castle Goznor only to discover the next day that Moric has shifted his sights to Canonia. After travelling to Canonia again, raiding Moric's Battleship and defeating him again, this time inside the body of Grand Adventurer, Social Fox, Emela and Mardek are forced to leave Deugan behind so they can escape Moric's ship without being killed by the Dracelon. Emela and Mardek return to Castle Goznor and are knighted, however Emela turns down the offer and leaves without an explanation.

In MARDEK Chapter 3: Keystones, Emela has returned to the Water Temple and has taken up her position as Water Guardian. However, one day she discovers Deugan on the shores of Lake Qur, badly wounded but still alive. Emela nurses him back to health, and the two end up falling in love in the process. However, this comes to an end when Deugan decides to leave under the guise of Grand Adventurer Lone Wolf, where he becomes famous back on the surface, leaving Emela alone once more.

Later, when Mardek and his friends manage to overwhelm the traps and monsters of the Water Temple in their quest for the Elemental Crystals, Emela is forced to do battle with her old friend, recognising Mardek but him not recognising her. Ultimately she is defeated and allows Mardek to take the Crystal, leaving to find the others.

According to her profile, Emela is somewhat of a shy person. She is very nice to Mardek and Deugan, and is attracted to both of them. Unlike most girls, she does not like Steele. She is merciful and does not allow Steele to kill Muriance, and feels bad when she badly harms him with a thunderbolt despite his nastiness.

As a party member, Emela is all about magic. She starts off with an air attack, and equipped with a water wand. If she attacks with her wand, she deals damage to the enemy and gains mana equal to the amount of damage she does, thanks to this she can continuosly cast magic. She is very much what you would normally expect from a mage, strong in spirit and resistant to magic, but weak to physical attacks. She also has the flexibility of learning all 4 natural element attacks, making it important to know which spell to use on which enemy.

Retrieved from "https://figverse.fandom.com/wiki/Emela_Andra_Wu-Jardu?oldid=88025"
Community content is available under CC-BY-SA unless otherwise noted.