Donovan Gonoru Fa-Alregis is a playable character in MARDEK. Donovan is the King of Goznor's only son, and such, he is also the heir to the throne. He is one of the Royal Guards who journeys into the Gem Mine with Mardek, Deugan, Emela, Steele and Sharla. He has a take-charge attitude and promptly assigned tasks for everyone at the mine (which was fine by everyone except Steele). Donovan also convinced Sharla to join the Guards. 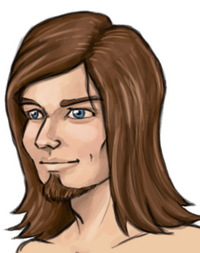 One of the Royal Guard recruits who signed up at the same time as Mardek and Deugan. He has long hair. He's a natural leader-type, naturally taking charge on missions, but he does a good job of it and treats his teammates with respect.

In Chapter 2, he was the de facto leader of the guards in the Gem Mine.

In Chapter 3, he accompanies Mardek into the Sun Temple to investigate the strange attacks in there. He was the first to point out to Mardek that the King was behaving strangely. After the possessed King's defeat, the real King reveals that Donovan was his son, and he takes the throne.

Despite being the heir to the throne, he doesn't want his royal status to be known by his fellow Guards and Knights, as he wants to build a reputation with his talents rather than with his royal blood. Sharla seems to be attracted to him, and judging by his dialogue in his dreamstone and his reaction when Steele flirts with Sharla before the fight with him in Chapter 3 (if he and Sharla are in the party), he likely feels the same way.

Donovan has a wide assortment of offensive Fire skills, such as Blaze and Burn. However, his real strength lies in his boost- the ability to raise the Strength of any other member, which is an extremely useful technique. With Strength Boost, Donovan can make Mardek a walking quad-elemental wrecking ball of doom, or give Sslen'ck the ability to do colossal damage to Water foes. Unfortunately, he is something of a one-trick pony. Donovan is a mage, not a fighter, and lacks non-fire elemental attacks. While he has one heck of a trick, he doesn't that much else that your other teammates don't do just as well or better.

In general, Donovan can have a place on your team regardless of the area, but you will probably want a more potent attacker, a buffer with a more diverse repertoire, or a more versatile character in general. Of course, if you need fire or have a complex strategy that involves Mardek dealing 9999 damage to Karnos, then Donovan is probably your go-to character.

Retrieved from "https://figverse.fandom.com/wiki/Donovan_Gonoru_Fa-Alregis?oldid=88100"
Community content is available under CC-BY-SA unless otherwise noted.