Deugan Selmae Eh-Deredu is a playable character in the MARDEK series. He is a young male human hailing from the kingdom of Goznor who, together with his best friend Mardek, dreams of becoming a Grand Adventurer. Both join the Royal Guard of Goznor to further this dream, holding the esteemed hero, Social Fox, in particular regard as an exemplar of heroism. He often acts as a foil to his innocent friend. 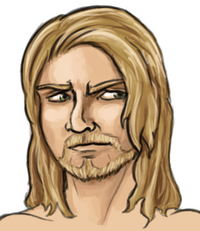 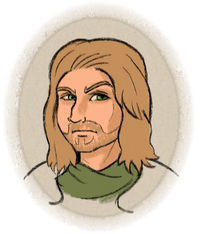 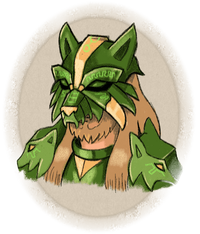 Deugan is the only son of Polly and Derek. During his childhood, he befriended Mardek, and they enjoyed going on imaginary 'adventures' with each other where they pretended to be mighty heroes. Growing up, he was secretly bothered by the fact that his father is merely a shopkeeper, unlike Mardek's adventurer father, Enki.

One morning, he witnesses an object fall from the sky and land near Goznor. Excited that investigating the object would be another adventure, he goes to Mardek's house and wakes him up, urging that they go to the crash site. They travel through Soothwood and enter the Crash Site, where they encounter Mugbert, a longtime bully. Deugan assumes that he plans to use the fallen star for evil, and together with Mardek, fight him and send him running away. They then enter the object, where Deugan witnesses a mass of light enter Mardek's body. When Mardek begins to not speak like he normally does, Deugan becomes confused, but acknowledges the fact that it is not his friend speaking, but something inside him. Later, the two of them arrive back at their homes, where Deugan hopes that nothing bad happens because of the spirit.

As the years pass, Deugan and Mardek go on more adventures and eventually join the royal guards of Goznor, hoping that joining would further their dream of becoming heroes. At the morning of their final test to become guards, he wakes Mardek up, excited that they will be going on their first real mission. In the conversation, he also expresses his feelings for Emela and disgust at Steele. They report to Jacques for the mission, who explains to them and the rest of the applicants that they are to liberate the nearby mines from bandits. When he asks the group to form teams for the mission, Deugan allows Mardek to go with Emela, only to be stopped by Steele. As a result, Deugan and Mardek go together.

Arriving at the mines, he expresses his support about Donovan being the de facto leader of the group. Later, Deugan and Mardek reach the bandit chief, where they eavesdrop on a conversation before helping Emela and Steele subdue him. After defeating Muriance, Deugan allows him to leave if he abandons his life of crime, much to Steele's annoyance. After Steele is struck by Emela's thunderbolt, Deugan remarks that his 'death' was imminent. He then goes on with Mardek and Emela to kill the Lake Hag, then freeing Goznor and Canonia of zombies. Unfortunately, Deugan stays on Moric's Battleship to save the group from Moric's Dracelon when it crashes and he presumably dies. Mardek doesn't find any traces of him when he searches for him near Lake Qur where Moric's Battleship crashed.

Deugan (barely) survives the crash and is rescued by Emela, who takes care of him until he recovers. He doesn't want to rejoin Mardek as that act might make his sacrifice much less heroic. Instead, he embarks on a new adventure, wearing entirely new armour and takes on a new persona called 'Lone Wolf'. These rumours are confirmed by the first eight Dreamstones. He also appears after winning the Cambria Champion Tournament but quickly runs away from Mardek after he sees him, dropping Dreamstone #8.

After Qualna is defeated, Deugan is seen watching Akhmed Wobblescimitare's play in Aeropolis. After the play, he speaks to Mardek, but doesn't reveal his true identity.

In contrast to the carefree Mardek, Deugan is more practical and level-headed. Despite this, he is enthusiastic about adventuring and becoming a hero. Also, Deugan says that he's always envied Mardek because of his carefree attitude, and that he's heard people call him 'too intense'.

Deugan also has a large crush on Emela, similar to Mardek, which is why he chooses not to stay with her during their time together in the Water Temple. Deugan believes that Mardek deserves Emela and not him, not knowing that Emela loves *him* and not Mardek.

Retrieved from "https://figverse.fandom.com/wiki/Deugan_Selmae_Eh-Deredu?oldid=83515"
Community content is available under CC-BY-SA unless otherwise noted.