Their wings don't flap; rather, they billow and flow like silk ribbons in water as this graceful monster swims elegantly through the air.

A Damserulean resembles a large damselfly. Its extended body is segmented and coloured bright blue with brown highlights. Its head is blue with gold highlights and large blue eyes. It has six long, slender wings in a translucent blue shade.

Wild Damseruleans can not be found anywhere, but a few can be battled in scripted encounters:

Damseruleans have high SPIRIT but low POWER and VITALITY. They are susceptible to Air and Earth-elemental attacks.

Damseruleans have high SPIRIT and above-average AGILITY, but their POWER and VITALITY are both below average.

Damseruleans are weak to Air and Earth but resist Water and the moral and spiritual elements.

Damseruleans share a skill pool with their prevolution, Cyanymph, so they cannot learn any new skills through evolution. A Damserulean can use Water, Air and non-elemental attacks. It is able to boost its SPIRIT and enchant itself, and it can lower the POWER, SPIRIT and AGILITY of its foes, confuse them or cause them to flinch.

A Damserulean can be evolved from a Cyanymph when it reaches Level 6. It is possible to cancel the evolution, in which case the same evolution will be available at each subsequent levelup. 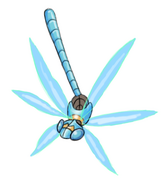 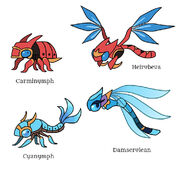 Retrieved from "https://figverse.fandom.com/wiki/Damserulean?oldid=87944"
Community content is available under CC-BY-SA unless otherwise noted.