An Arph is a small, puppy-like monster. Its primarily white fur is embellished with red markings, most notably a large stripe running down its back. It has thick plumes of fur or possibly feathers on its tail and in a ruff around its neck. It has large blue eyes and small blue feathery wings on its back.

Wild Arphs can not be found anywhere, but several can be battled in scripted encounters:

Arphs have rather balanced stats. They are susceptible to Fire, Earth and Dark-elemental attacks.

Arphs have fairly average and balanced base statistics for an essent monster.

Arphs are weak to Fire, Earth and Dark but resist Air, Light and Aether attacks.

As an Essent monster, Arphs cannot learn skills through evolution. A newly-cloned Arph will always know its two Default skills. It can use Fire, Air, Light, Dark and non-elemental attacks. It is able to increase its POWER and AGILITY, and it can lower the POWER and SPIRIT of its foes or cause them to flinch.

Arph essence is one of the rewards for the Curator's sidequest. If this reward is obtained, an Arph can be cloned at a Miasmachine for 20 Syanra. It can be evolved into a Howlucea when it reaches Level 6. It is possible to cancel the evolution, in which case the same evolution will be available at each subsequent levelup. 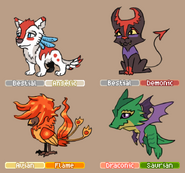 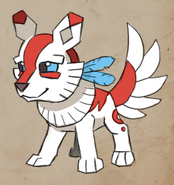 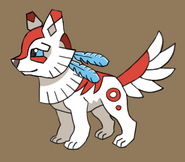 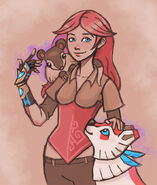 Cerise with her Arph, Luna, and her Modestoat, Rosa
Add a photo to this gallery

Retrieved from "https://figverse.fandom.com/wiki/Arph?oldid=87948"
Community content is available under CC-BY-SA unless otherwise noted.