Arkinneas, or Ark for short, is a playable character in Deliverance.

Ark is a green wolf that first appears through a hidden path. He gives you permission to take the crystal, but comes with you, in case. It's possible not to recruit him by avoiding talking to him and clicking the left dreamcatcher.

He and Aurelia seem to know something unpleasant about Aurelia's mother, though the subject only comes up once, briefly.

He's going to be given a new race in the remake.

Ark specialises in melee combat, but starts with the healing spell Bolster, and offense spells Venom, Fairy Flame and Stone I, as well as the Transform spells Wasp, Bat and Ooze form. 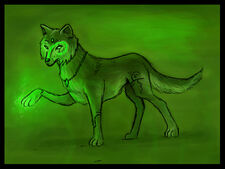 Retrieved from "https://figverse.fandom.com/wiki/Arkinneas?oldid=83549"
Community content is available under CC-BY-SA unless otherwise noted.